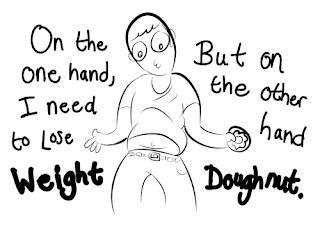 Near the beginning of this blog, I started by setting some goals for weight loss. My original goal was to hit 210 (from 233) by the end of March followed by another 10 pounds by roughly April or May. I wasn't setting too high of goals. Anyway, I hit the first goal with ease. I was actually down to 208. Two months later, I am still at 208. Of course, I suffered a herniated disc at C5-C6 (the cervical part of the spine) and that kept me from pretty much doing anything for a couple of months.

Well, that time is over. My neck and all of the associated pains are gone -- at least for now. It is now time for me to return to the gym and get back to exercising. I haven't weighed myself in a couple of days, but I believe I am running around 209, which isn't too bad since my dietary habits plummeted as well. Started off with a short run during the late evening. I plan on a light gym day tomorrow perhaps followed by a 30 minute quick walk for the fat burning efforts. And I will follow that up with a greasy cheesebu...no, no, no, a healthy salad.
Posted by Unknown at 00:29